It seems that you're in Germany. We have a dedicated site for Germany 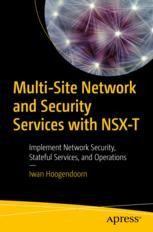 Know the basics of network security services and other stateful services such as NAT, gateway and distributed firewalls (L2-L7), virtual private networks (VPN), load balancing (LB), and IP address management. This book covers these network and security services and how NSX-T also offers integration and interoperability with various other products that are not only created by VMware, but are also referred by VMware as third-party integrated vendors.

With the integration of VMware vRealize Automation, you can automate full application platforms consisting of multiple virtual machines with network and security services orchestrated and fully automated.

From the operational perspective, this book provides best practices on how to configure logging, notification, and monitoring features and teaches you how to get the required visibility of not only your NSX-T platform but also your NSX-T-enabled network infrastructure.

Another key part of this book is the explanation of multi-site capabilities and how network and security services can be offered across multiple on-premises locations with a single management pane. Interface with public cloud services also is included. The current position of NSX-T operation in on-premises private clouds and the position and integration with off-premises public clouds are covered as well.

This book provides a good understanding of integrations with other software to bring the best out of NSX-T and offer even more features and capabilities.

What You Will Learn

Who This Book Is For

Virtualization administrators, system integrators
Show all
About the authors

Iwan Hoogendoorn started his IT career in 1999 as a help desk agent. Soon after, he started to learn Microsoft products and obtained MCP, MCSA, MCDBA, and MCSE certifications. While working as a Microsoft Systems Engineer, Iwan developed additional skills and knowledge in computer networking. Networking became a passion in his life. This passion resulted in learning networking with Cisco products. One of Iwan's dreams was to work for Cisco. But before this could happen, he first needed to finish his bachelor's degree in ICT, which he completed in 2009. In early 2010, he started working for his dream company, Cisco. After finishing his master's degree (part-time) in computer science at the University of Amsterdam and becoming a CCIE (#13084) in six different technology areas, Iwan wanted to learn something new, and that was virtualization. Because networking was something that ran through his veins, network virtualization was the next logical step. So he decided to learn VMware NSX.

Iwan got the opportunity to work for VMware in 2016 as Senior NSX PSO Consultant. In his time at VMware, he gained more knowledge on private and public clouds and the related products that VMware developed to build the Software-Defined Data Center (SDDC). As new technology is growing at a rapid pace (especially within VMware and the VMware cloud space), Iwan is trying to keep up.

Iwan is the author of the Apress book, Getting Started with NSX-T: Logical Routing and Switching.