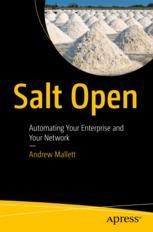 Automating Your Enterprise and Your Network

There is a rapid growth of automation in server rooms and data centers. The days of having many administrators running around busily configuring and maintaining servers are gone and have been replaced with droves of Salt-Minions; agents beavering away on the target nodes ensuring the configuration is as specified. This book covers Salt Open (also known as SaltStack Open) from the ground up and shows you how to work with two Linux distributions.

You'll see how Salt Open is duplicated with ArubaOS and IOS networking devices, which can be configured without the underlying OS. As you step through the configuration options, you'll learn how to run remote execution modules from the CLI before looking at stateful configuration using SLS files. Moving on, you'll learn how to configure the systems where you also need to monitor your devices and that is when reactors and beacons come into play. Creating beacons to alert the server when thresholds are exceeded, you will be able to create reactors to mitigate the issues identified by the beacons.

By the end of this book, you will be able to deploy Salt to your servers and network infrastructure. You will be able to install the Salt-Master and Salt-Minion, executing commands from both the Master and the Minion. The networking devices you need to manage will be controlled through the Salt_Proxy Minions that you have configured. Finally, you will be able to load-balance connections to the master with Salt-Syndic.

Who This Book Is For
System administrators experienced in Linux administration, who desire to expand their horizons into the world of automation, moving from scripts to states.

Show all
About the authors

Andrew is a well known Linux consultant and trainer, his YouTube Channel has over 65K subscribers and more than 1000 videos. Working mainly online now Andrew has authored courses on both Pluralsight and Udemy and regularly teaches classes online to a worldwide audience. Andrew is familiar with Linux and UNIX and has worked with them for over 20 years. Scripting and automation is one of his passions as he is inherently lazy and will always seek the most effective way of getting the job done. The Urban Penguin, his alter-ego, is a UK based company where his work is created from and currently employs 5 people.